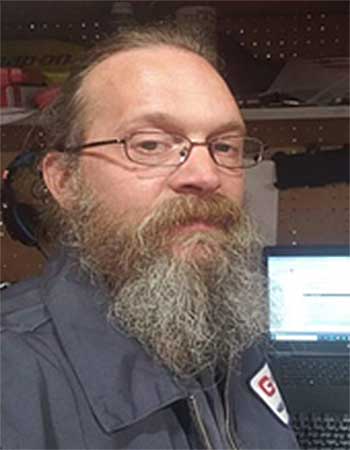 Michael Nicholson is an ASE Master Certified L1 Technician he is also a certified ASE Undercar Specialist. Mike knew from a very young age, 4 years old, that he wanted to be a mechanic when he grew up. His love of turning wrenches began when his dad took him to the Brooklyn Park police department motor pool to check on the repairs to his cruiser. Mike was in awe of the sights and sounds of the shop, from that day forward he set his sights on becoming a mechanic one day. During professional day in second grade, while most of the kids stated they wanted to be doctors, lawyers, actors, etc.. there was Mike who kept with his dream, stating he wanted to be a mechanic one day. In 1996 he was hired as a shop cleaner/parts runner for a small company in Tacoma, WA. He worked there for a couple of years before landing a job with a different company as a technician. He worked for a couple different companies learning and growing as a technician, but did not focus on diagnostics. He was offered a position at a local mill as a millwright in 2008, which the pay was significantly greater than what he had been making as a technician. In 2010, while transitioning from millwright to rolling stock mechanic he lost half of his left thumb. He spent the next year and a half with surgeries, rehab and reflections of his life path. He decided to go back to being an automotive technician and was hired at a wonderful local shop in 2012. Mike soon discovered how much technology had advanced in the 4 years since he last worked as a technician. At that time he made it his mission to become a diagnostician, he went to every training opportunity that he could. Not only in a classroom setting, but online as well. He still goes to as many classes as he has time to attend. He is currently working at the Ford-Chrysler dealership in Shelton and is working towards all his certifications through the dealership. When he is not working or attending classes he spends his free time with his wife and their 6 Australian Cattle Dogs.

Mike is familiar with the PICO scope, but he primarily uses the Snap-On Verus Pro. He is looking forward to beginning a new chapter in his life of being an instructor. It will be a chance for him to teach others the things that he has learned through trial and error as well as an opportunity for him to continue to learn through the interactions with other technicians that take his class.

No products in the cart.